I believe the history of stock markets and these questions are related to the new web3/crypto/DeFi and its future. After all, promises of shares and tokens are almost the same - community ownership.1

Dutch East India Company was a special company. It was the first company to issue shares to the general public. Company had a big mission and required a lot of investment. At the same time, the possibility of lucrative dividends was high. This aligned incentives for the company and its investors.

This was the start of public companies. Quite soon people started trading their shares in the companies. Again incentives were aligned - folks with shares could get liquid money whereas the new shareholders could earn from dividends. Gradually, people were making more money by trading shares than from dividends. They would buy shares at a lower price and sell it to others at a higher price.

People started forming narratives about the companies, they also started studying financial data better to supplement the narrative. However, as it happens in the world, a lot of fraud mechanisms also emerged.2

Now, many of these companies were really important for the economy. Some were developing modern infrastructure and hence governments started creating regulations to protect both companies and investors from these frauds. Today, while fraud has not gone completely to zero, stock exchanges are relatively safe and well-regulated.

If you see, a lot of web3 promises seem to be exactly the same as companies of earlier generations promised via shares.

However, there is very little regulation - well, that’s intentional, after all decentralization is a key foundational pillar and any form of government regulation will be seen as the defeat of the original goal.

However, there’s a big chasm that web3 still needs to cross3. 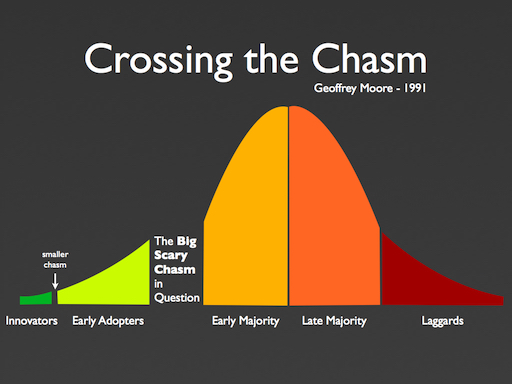 From this perspective I see following four distinct scenarios playing out:

Future is unpredictable. Narratives are linear and have survivor bias. What happens in the world is chaotic and non-linear. Even in web3, pragmatically speaking, a bit of everything will happen.

I do think that web3 tech, while still in its infancy, is quite neat. However, it has a long way to go. I just hope greed, fraud and associated chaos doesn’t hinder web3 from reaching its full potential.